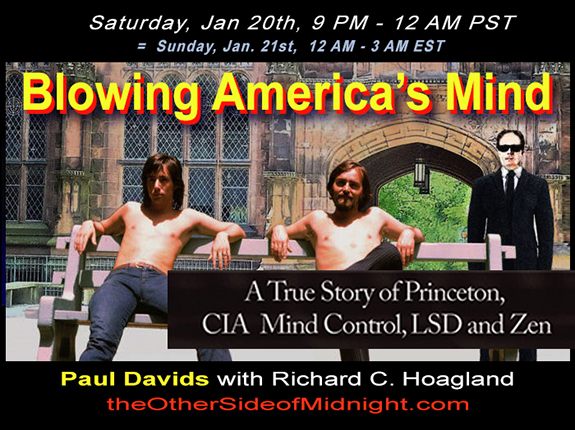 Richard’s Items Trump looks to extend dominance as GOP starts to panic [News] Third launch scrapped in a week: Is SpaceX failing or just innovating? [News] Why We Can’t Just Throw Our Garbage Into the Sun [News] Watch Scott Kelly return to Earth today after spending a year in space [News] Researchers discover ‘exquisite’ 515-million-year-old fossilized nervous system [News] Paul’s Items Now available for pre-order at Amazon.com, publication date is April 4,2016. 514 page hardback, also available for Kindle. This book follows from the Paul Davids documentary THE LIFE AFTER DEATH PROJECT as it is a complete account, with contributions from scientists, of the Ackerman afterlife communication case. THE LIFE AFTER DEATH PROJECT, a Special-Edition 2-DVD set. Special Guest: Paul Davids PAUL DAVIDS is an author, artist and director, who has produced films that include Marilyn Monroe Declassified (2016), NBCUniversal’s Jesus in India (2007) and The Sci-Fi Boys (2006), and Showtime s Roswell (1994). He co-authored […]

1. Original 1938 ‘War of the Worlds’ CBS Radio Broadcast 2.  3.  4. 5.  6.  7.  8.  9.  Paul Davids is from Bethesda, Maryland, the son of a famous Georgetown University professor of American History, Dr. Jules Davids. Dr. Davids worked extensively with John F. Kennedy on the writing of PROFILES IN COURAGE (for which he is credited in the Preface).  Jules Davids was a professor to Jacqueline Kennedy and later to Georgetown undergraduate Bill Clinton. Paul Davids is a graduate of Princeton University, where he majored in psychology and won numerous awards in writing. He then attended the American Film Institute Center for Advanced Film Studies in Beverly Hills. He is married to Hollace Davids, who is Senior Vice-President of Special Projects for Universal Pictures and who has produced several of his films. After a few years working as a script analyst for Hollywood agent Paul Kohner (where he read all the submissions for […]