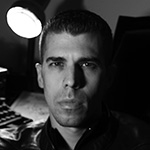 Christopher Garetano was born in New York. He majored in film and is a graduate of the School Of Visual Arts, in Manhattan. He is the owner and president of White Phosphorus Pictures LLC. In 2005 He released his first documentary titled, Horror Business; an experimental study regarding the struggles of independent horror movie making.

In 2006 he set out to make Montauk Chronicles, subsequently creating two completely different motion pictures. Montauk Chronicles is an almost ten-year study of the paranormal legends that surround the Camp Hero Air Force base in Montauk, New York. The movie is primarily a documentary with bizarre and horrific interpretations of the subjects claims of mind control, alien abduction, time-travel experiments and murder.

Garetano wrote and created the graphic novel South Texas Blues. Illustrated by Trevor Cook, South Texas Blues is based on the true story behind the making of “The Texas Chainsaw Massacre”, which was serialized in Fangoria Magazine throughout 2012.

The final release version of Montauk Chronicles was ultimately completed in the fall of 2014 and it premiered at the Philip K. Dick Film Festival, in New York City, where it won the “Best Documentary Prize.”

Christopher was recently hired to be the host of a new (NETWORK) paranormal reality series that will premiere later this year.

Christopher has several film projects, in development, including the film version of his South Texas Blue graphic novel. His next paranormal-themed motion picture is titled Spirit Chronicles, a unique study of ghosts, hauntings and life after death.