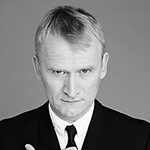 Dean Haglund is a Canadian actor, known for the role of Richard “Ringo” Langly, one of the Lone Gunmen on The X-Files. Haglund is also a stand-up comedian, specializing in improvisational comedy. In addition to The X-Files, he played the voice of Sid in Tom Sawyer, Haglund also portrayed Langly in the spin-off The Lone Gunmen, which aired thirteen episodes in 2001.

Haglund currently hosts the Chillpak Hollywood Hour podcast, where he discusses all things Hollywood with independent filmmaker Phil Leirness. As well as periodically hosting episodes of the X-Files on the YOUTOO television channel. Haglund is on the advisory board of Sci-Fest, the first annual Los Angeles Science Fiction One-Act Play Festival, to be held in May 2014

Dean was born in Oakbank, Manitoba, Canada,now living in Sydney Australia and is the son of a structural engineer. He is the inventor of the Chill Pak, a commercial external cooling product for laptop computers.