“When Hubble was launched in 1990, I was beginning my PhD studies into gravitational lensing, the action of mass bending the paths of light rays as they travel across the universe. Hubble’s image of the massive galaxy cluster, Abell 2218, brings this gravitational lensing into sharp focus, revealing how the massive quantity of dark matter present in the cluster – matter that binds the many hundreds of galaxies together – magnifies the light from sources many times more distant. As you stare deeply into the image, these highly magnified images are apparent as long thin streaks, the distorted views of baby galaxies that would normally be impossible to detect. It gives you pause to think that such gravitational lenses, acting as natural telescopes, use the gravitational pull from invisible matter to reveal amazing detail of the universe we cannot normally see!” – Prof. Lewis 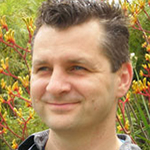 Geraint F. Lewis is an astrophysicist, who is best known for his work on dark energy, gravitational lensing and galactic cannibalism. Lewis is a Professor of Astrophysics (Teaching and Research) at the Sydney Institute for Astronomy, part of the University of Sydney’s School of Physics. He is head of the Gravitational Astrophysics Group, is the Associate Head for Research, and holds an Australian Research Council Future Fellowship.

Lewis undertakes a broad spectrum of research in cosmology. On the largest scales, his program involves looking at the influence of dark energy and dark matter on the evolution and ultimate fate of the universe.

Another aspect of Lewis’s research uses the phenomenon of gravitational lensing to probe the nature and distribution of the pervasive dark matter, and employing individual stars to magnify the hearts of quasars, the most luminous objects in the universe.

Closer to home, Lewis’s research focuses upon galactic cannibalism, where small dwarf galaxies are torn apart by the much more massive Milky Way and Andromeda Galaxy. Using telescopes from around the world, including the 10-m Keck telescope in Hawaii, he has mapped the tell-tale signs of tidal disruption and destruction, providing important clues to how large galaxies have grown over time.