1. Here’s Why the SpaceX Rocket Landing Is Such a Big Deal [News] 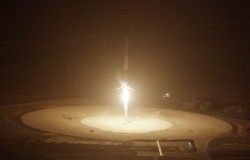 Dr. David Livingston is the founder and host of  “The Space Show”.  In the ten and a half years and close to 1700 interviews, it’s the nation’s only talk radio program exclusively focusing on space commerce, space tourism, and facilitating our becoming a space-fairing economy and society.  Dr. Livingston is also the Executive Director of the Giant Leap Foundation, Inc., the 501(C)3 that controls The Space Show promote space education.

David is also an Adjunct Professor of Space Studies in the Odegard School of Aerospace Sciences at the University of North Dakota.  He has a BA in Political Science, an MBA specializing in International Business Management, and a Doctorate in Business Administration (DBA).  His dissertation was titled “Outer Space Commerce: Its History and Prospects”.

Livingston is a frequent speaker at space conferences, he has published more than 50 papers including chapters in books. Most recently he authored the Space Tourism chapter in the “Space Encyclopedia” and co-authored three business and financial chapters in the new SMAD Textbook, “Space Mission Engineering: The New SMAD”.  David has lectured at several universities and has  been a guest on many national radio programs, including a weekly segment on the John Batchelor nationally syndicated radio program.  When not teaching, broadcasting, writing, or just playing, Livingston is a business consultant working with clients on business and strategic planning.