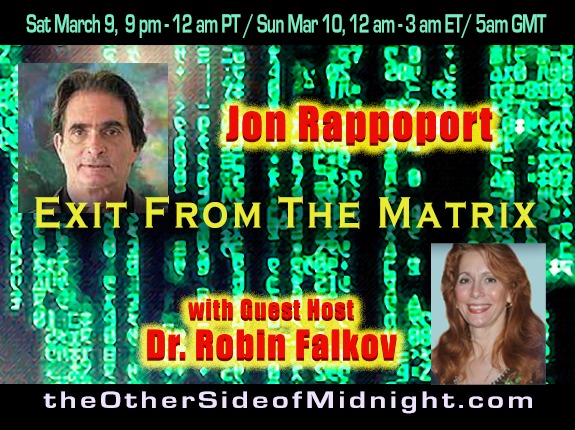 My beautiful Robin has died.

Hear two like-minded seekers range across the almost imagined — if not “unimaginable” — dimensions of our currently Controlled Reality. 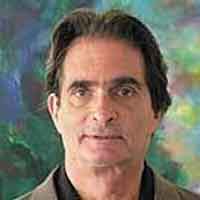 Jon Rappoport has worked as a free-lance investigative reporter for over 30 years. He is the author of three explosive collections, THE MATRIX REVEALED, EXIT FROM THE MATRIX, and POWER OUTSIDE THE MATRIX. He has written articles on politics, health, media, culture and art for LA Weekly, Spin Magazine, Stern, Village Voice, Nexus, CBS Healthwatch, and other newspapers and magazines in the US and Europe.

In 1982, the LA Weekly submitted his name for a Pulitzer prize, for his interview with the president of El Salvador University, where the military had taken over the campus. Jon has hosted, produced, and written radio programs and segments in Los Angeles and Las Vegas (KPFK, KLAV). He has appeared as a guest on over 200 radio and television programs, including ABC’s Nightline, Tony Brown’s Journal (PBS), and Hard Copy. In 1994, Jon ran for a seat in the US Congress from the 29th district in Los Angeles.  After six months of campaigning, on a very small budget, he garnered 20 percent of the vote running against an incumbent who had occupied his seat for 20 years. In 1996, Jon started The Great Boycott, against eight corporate chemical giants: Monsanto, Dow, Du Pont, Bayer, Hoechst, Rhone-Poulenc, Imperial Chemical Industries, and Ciba-Geigy.  The Boycott continues to operate today.

Jon has lectured extensively all over the US on the question: Who runs the world and what can we do about it? Since 2000, Jon has operated largely away from the mainstream because, as he puts it, “My research was not friendly to the conventional media.” Over the last 30 years, Jon’s independent research has encompassed such areas as: deep politics, conspiracies, alternative health, the potential of the human imagination, mind control, the medical cartel, symbology, and solutions to the takeover of the planet by hidden elites. He maintains a consulting practice for private clients, the purpose of which is the expansion of personal creative power. A painter, Jon’s work has been shown in galleries in Los Angeles and New York. His poetry has been published by The Massachusetts Review. He is a graduate of Amherst College (BA, Philosophy), and lives with his wife, Laura, in San Diego.