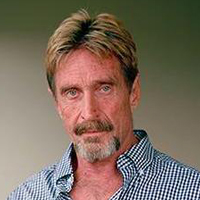 John McAfee  is a world-famous computer scientist, activist, hacktivist, yoga instructor, and the developer of the first commercial anti-virus program. The cybersecurity legend and privacy advocate is running in the 2016 Presidential Election as a member of the Libertarian Party. His website is McAfee2016.com

John McAfee was born on a US Army base in the United Kingdom on September 18, 1945, and raised in Salem, Virginia. He received both a bachelor’s degree in mathematics and an honorary Doctor of Science from Roanoke College in 1967 and 2008.

John was employed as a programmer by NASA’s Institute for Space Studies in New York City from 1968 to 1970. From there he went to Univac as a software designer and later to Xerox as an operating system architect. In 1978 he joined Computer Sciences Corporation as a software consultant. He worked for consulting firm Booz Allen Hamilton from 1980-1982. In the 1980s, while employed by Lockheed, McAfee received a copy of the Brain computer virus and began developing software to combat viruses.

In 1987 McAfee founded McAfee Associates, a computer anti-virus company. In 1989, he quit Lockheed and began working full-time at McAfee Associates, which he initially operated from his home in Santa Clara, California. The company was incorporated in Delaware in 1992. Two years after McAfee Associates went public, John sold his remaining stake in the company.

Recently, John McAfee has been in the news after publicly volunteering to decrypt the iPhone used by the San Bernardino shooters, avoiding the need for Apple to build a backdoor.