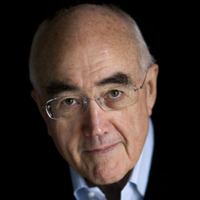 Science and technology historian, futurist, and author James Burke fascinates audiences with his unique perspective on the process of innovation and how it causes people and institutions to change. The Washington Post named him “one of the most intriguing minds in the Western world.”

For over 40 years Burke has written, produced, directed, and hosted award-winning television series on the BBC, PBS, Discovery, and The Learning Channel. He created and hosted three seasons of the documentary series, Connections. Each episode examined the interconnecting ideas, events, and coincidences that led to the technological advances of today. His other series have included The Day the Universe Changed, The Neuron Suite, and After the Warming, as well as a special for the National Art Gallery on Renaissance painting, Masters of Illusion.

He is the best-selling author of The Knowledge Web, Circles, Twin Tracks, and American Connections: The Founding Fathers Networked. He has been a frequent contributor to Scientific American and TIME magazine and wrote the entry on invention for the Britannica Online Encyclopedia.

Educated at Oxford, Burke has advised the National Academy of Engineering, The George Lucas Educational Foundation, and the SETI project. He has been named an honorary fellow of the Society for Technical Communication and has received gold and silver medals from the Royal Television Society.

The BBC’s chief reporter for the Apollo moon missions, and a popular speaker for companies such as IBM, NASA and Microsoft, Burke takes audiences on a journey from past to future, following the serendipitous pathways of change. His presentations illustrate the vast interconnected network of cause and effect that drives history and describe the new kind of thinking required in the world that lies ahead.

The James Burke Institute for Innovation in Education is working to launch an online interactive knowledge mapping system to be used as a teaching aid and reference tool. The Knowledge Web, as it is known, will use virtual reality to help users explore information in a highly interconnected way.

His next book will be the provisionally titled The Culture of Scarcity.