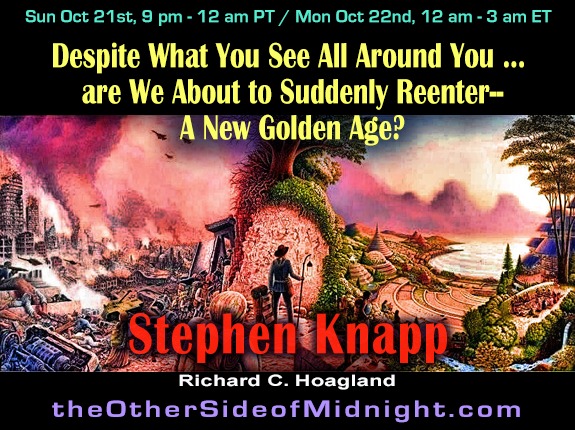 What if our globe-spanning, high-tech “civilization,” that most of us take totally for granted — the awesome power of a simple electric switch … the magic of instant, globe-spanning telecommunications, held in our own hands … the ability to fly across continents in a single afternoon … and even venture far beyond our one small planet — is NOT the product of “thousands of years of painstaking, ever more sophisticated scientific and technological advancements,” as we’ve been repeatedly informed ….
But actually, is the result of “humans” attempting to return to an age when we had all of these “god-like” capabilities … and, far, far more–
And … through some unimaginable catastrophe … we abruptly lost them?
What if, despite everything we see around us — endless environmental carnage … endless catastrophic wars … endless human suffering as a result — we are actually, literally, on the eve of a second, equally abrupt “planetary Transformation”–
Back … to a literal “new Golden Age” for Humans?!

My guest tonight, Stephen Knapp, will explore with me precisely why this staggering, almost unimaginable possibility … is actually quite REAL — drawing from a series of ancient, extraordinarily advanced “Vedic” texts … and grounded in the emerging, scientific reality of a real “Hyperdimensional Physics”–
Both … attesting to a time when “incredibly conscious, incredibly sophisticated, incredibly happy human cultures” preceded us across this planet … and how — because of the sharply changing HD Physics … we may all–
Live like that again.

1-  Something MAJOR Happened On Mars.. Are They Hiding It? 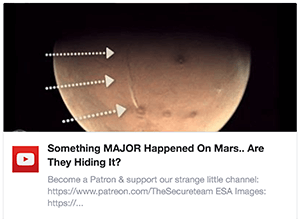 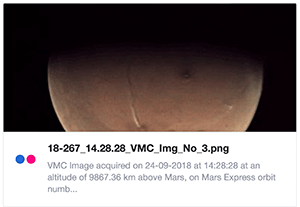 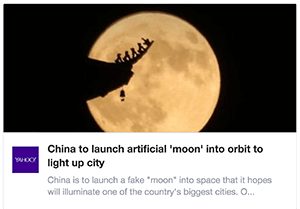 1- Stephen Knapp in front of the new inaugurated World Peace Dome at the MIT university in Pune, India   (Click on image to Enlarge) 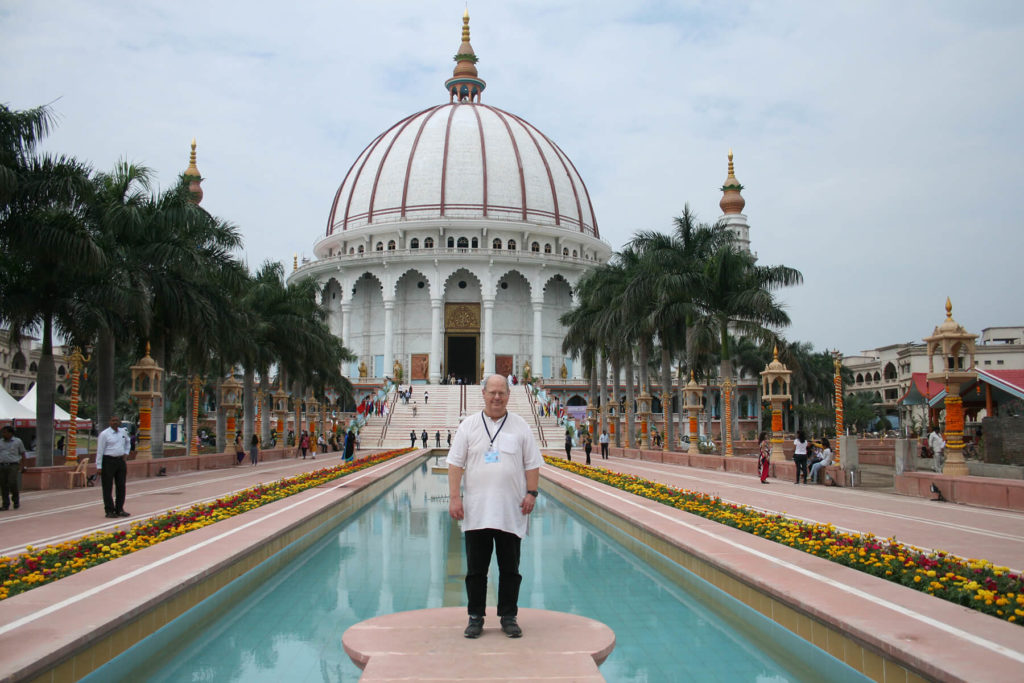 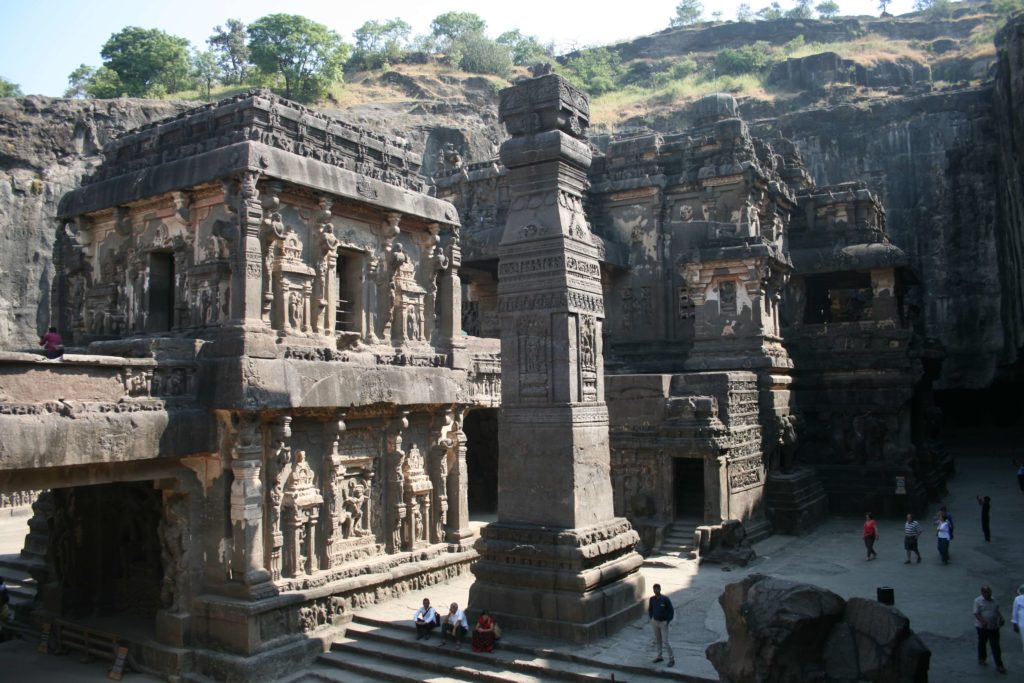 3 – Timings of the Four Yugas by Stephen Knapp

6-  The Power of the Bhagavad-gita and Sanskrit:

7-  The Secret of Bhakti-yoga:

8-  Travel to some of the Holy Sites of South India:

10-  Traveling to the Largest Vishnu Temple in the world, Angkor Wat: 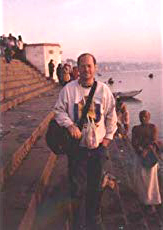 11– The Bhakti-yoga Handbook: A Guide for Beginning the Essentials of Devotional Yoga

12- The Power of the Dharma: An Introduction to Hinduism and Vedic Culture

13- Avatars, Gods and Goddesses of Vedic Culture: Understanding the Characteristics, Powers, Positions, and Legends of the Hindu Divinities

14- The Soul: Understanding Our Real Identity. The Key to Spiritual Awakening

15- Advancements of Ancient India’s Vedic Culture: The Planet’s Earliest Civilization and How it Influenced the World.

16- Ancient History of Vedic Culture: The Time Line of India’s Vedic Civilization as Presented by the Tradition

17- Bhakti-Yoga: The Easy Path of Devotional Yoga: From the Depths of Illusion to Making Contact With God.

18- Prayers, Mantras and Gayatris: A Huge Collection for Insights, Protection, Spiritual Growth, and Many Other Blessings

19- The Aryan Invasion Theory: The Final Nail in its Coffin

20- Defending Vedic Dharma: Tackling the Issues to Make a Difference

22- Crimes Against India: and the Need to Protect its Ancient Vedic Tradition: 1000 Years of Attacks Against Hinduism and What to do About it 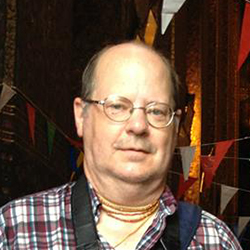 Stephen Knapp grew up questioning the mysteries of life, especially the spiritual mysteries. He grew up in a Christian family, during which time he seriously studied the Bible to understand its teachings. In his late teenage years, however, he sought answers to questions not easily explained in Christian theology. So, he began to search through other religions and philosophies from around the world and started to find the answers for which he was looking. He also studied a variety of occult sciences, ancient mythology, mysticism, yoga, and the spiritual teachings of the East. Finally, after his first reading of the Bhagavad-gita, the classic summary of Vedic philosophy, he felt he had found the last piece of the puzzle he had been putting together through all of his research. This increased his understanding of everything else he had been studying. Therefore, he continued to research all of the major Vedic texts of India to gain a better understanding of the Vedic science and its traditions, until he became a full-fledged follower and practitioner of Sanatana-dharma.  Under the authority of Srila A. C. Bhaktivedanta Swami Prabhupada, Stephen and was given the spiritual name of Sri Nandanandana dasa and became initiated into the spiritual line of the Brahma-Madhava-Gaudiya sampradaya.

He continues his study of the Vedic philosophy and its traditions, and also how its culture can be found in many parts of the world, dating back to prehistoric times.

In order to help others understand the deeper knowledge of the Vedic wisdom,
Stephen has written over 42 books on various aspects of India’s Vedic traditions and history, and has put the culmination of over forty years of continuous research, sadhana practice and travel experience into his books in an effort to share it with those who are also looking for higher levels of spiritual understanding. Full descriptions of all of his books, plus numerous articles he has written, and many more resources can be found on his website. More books are forthcoming, so check back to his website for any new developments. All of his books are also available on Amazon.com and all other Amazon internet outlets.

He has also made over 100 Youtube videos, half of which are talks or lectures, and half which are travel videos on seeing the sites and festivals of India, such as the huge Kumbha Mela festival.

Stephen has also been to India numerous times and traveled extensively throughout the country, visiting almost every state of India and most of the major holy places and temples, and many minor ones, and gaining a wide variety of spiritual experiences that only such places can give. He has just completed his 23rd visit to India.

Stephen is also a free-lance photographer and does what he calls cultural photojournalism, capturing the essence of India and spiritual life in practice, which can help explain and show the depth of the culture, and has put together a collection of over 18,000 slides of various places, temples, festivals, and people of India. You can see samples of his photography on his website. Stephen continues to travel to India on a regular basis, giving lectures on the Vedic tradition and continuing his research and experiences.

Stephen is also the founder of the World Relief Network, which has worked to help publish his books. He is also one of the founders and past president of the Vedic Friends Association (VFA), a non-profit organization for networking with other serious writers, researchers and teachers who help protect, preserve and expand the knowledge and benefits of Vedic culture, and with students who join to learn more about the Dharmic traditions.

An introduction to Stephen’s books, articles, research, photography of India, and other projects can be found at his website:

Or one of his blogs at: http://stephenknapp.wordpress.com.