Aug
2020/09/06 – Stephen Bassett – Is THIS Going to Be Our “October Surprise” (after all, it IS 2020 …)?!
thea
1 Comment
Tagged in Stephen Bassett and posted in Alien Encounters / Extraterrestrials, Ancient Civilizations, Disclosure / UFOs, Shows, UFOs 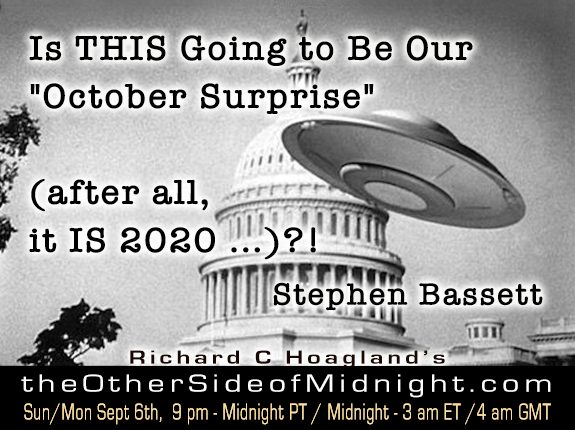 1. Articles on the PRG Political Initiative and the Clinton/ET connection (2014 – 2016, 500).
www.paradigmresearchgroup.org/newsitems2014.html

2. Articles directly and indirectly connected to the To the Stars Academy disclosure initiative (2017 – present, 675).
www.paradigmresearchgroup.org/newsitems2017.html

Stephen Bassett is the executive director of Paradigm Research Group (PRG) founded in 1996 to end a government imposed embargo on the truth behind extraterrestrial related phenomena. He has spoken to audiences around the world about the implications of "Disclosure" - the formal confirmation by heads of state of an extraterrestrial presence engaging the human race. He has given over 1200 radio and television interviews and PRG's advocacy work has been extensively covered by national and international media including being featured on CNN, Fox News, MSNBC, the Washington Post and the New York Times.

In 2013 PRG organized a "Citizen Hearing on Disclosure" at the National Press Club in Washington. In November of 2014 PRG launched a two year political initiatives out of Washington, DC that injected the ET issue into the 2016 presidential campaign. PRG recently launched a new exopolitical podcast out of Washington, DC - the DisclosureWire - based in the National Press Building two blocks from the White House.