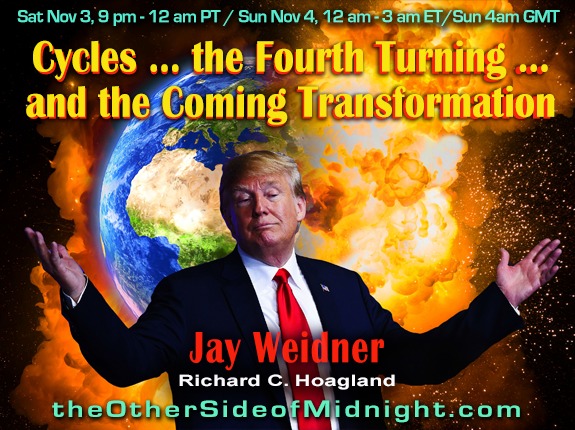 Is the obviously “blatantly anomalous” Trump presidency — now rapidly approaching its first major test, the imminent “mid-term elections” — actually, just the most visible indicator of coming, much more fundamental physical changes to this planet … driven by a long-term “planetary/solar system Cycle?”   Are we, indeed, now swiftly approaching another “nodal point” — in a grand, ~26,000-year-long Changing Cosmic Frequency … the famed Vedic “Yugas” — driven by measurable changes in the solar system’s underlying–   “Hyperdimensional/torsion field?”   And, is the unique “Trump presidency” — with its ever more blatant breaks from all past presidential traditions —  merely a political and cultural harbinger of an underlying, changing voter “consciousness” …  indicator of more dramatic physical solar system changes to come …?   And, is there anything that we can do — collectively … consciously — about any of this!?   Join us.     Richard C. Hoagland       Show Items Richard’s Items: 1- Farewell, Kepler: […] 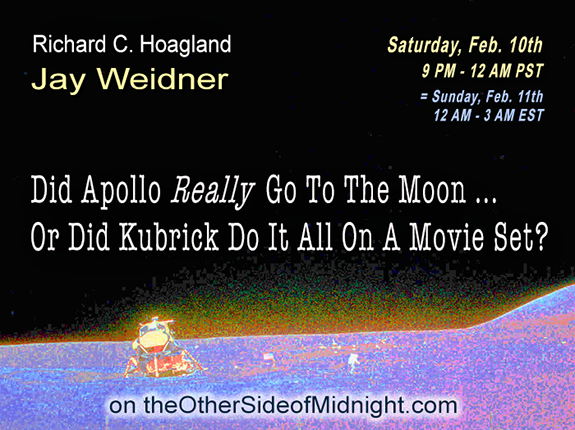 enterprisemission2001yahoo-com
Comments Off on 2018/02/10 – Jay Weidner – Did Apollo Really Go To The Moon …Or Did Kubrick Do It All On A Movie Set? Elon Musk & Starman
Jay Weidner

Chinese Lunar Landing Anne Strieber Passes Away Rosetta mission’s day in the Sun Alan Bean’s Website      Jay Weidner (pronounced Wide-ner) is a writer and filmmaker. Called by Wired Magazine as “an authority on the hermetic and alchemical traditions”, Weidner has authored two books and produced over 25 documentaries. He is currently producing programming for GaiamTV.com. He has just released his second feature film ‘The Last Avatar’ on Vimeo to glowing reviews. Website: JayWeidner.com