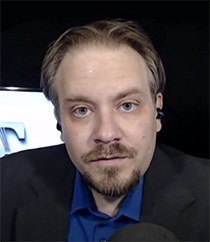 Andrew Steele is the Operations Manager for Architects & Engineers for 9/11 Truth as well as the host of the 9/11 Free Fall podcast.  He has been a contributing writer for a number of alternative news sites.  In addition, his writing has been featured in two magazines in Brazil and in AE911Truth’s online news pages.

Steele started looking into 9/11 Truth in 2005, shortly after returning from his service as Peace Corps volunteer in Uzbekistan, where he was a teacher and community organizer.  After a chance viewing of a 9/11 Truth video that an anonymous uploader had posted on a YouTube-like website, he spent a year researching the issue before creating his own alternative news aggregator site. He then began posting articles on it related to 9/11 Truth and other important issues.  Eventually he expanded his efforts by writing his own articles and producing his own videos.

In 2010, Steele joined the volunteer team at AE911Truth.  Since then, he has headed a number of projects for the organization, including the successful C-SPAN call-in campaign in 2013-2014, which culminated in the August 1, 2014, appearance of AE911Truth Founder and CEO Richard Gage, AIA, on C-SPAN’s Washington Journal program.  (Currently that 40-minute interview has more views than any other episodes on the channel’s website.)

In 2012, Steele created and began producing the 9/11 Free Fall podcast. It first aired on June 15th of that year.

In July of 2015, Steele started working full-time for AE911Truth, heading up its volunteer efforts.