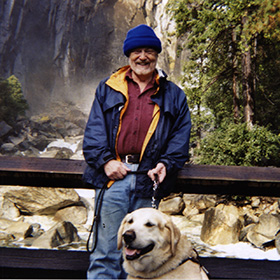 Determined to serve his country, D. Arthur Gusner, at the age of sixteen, “borrowed” his brother’s draft card and joined the United States Army. After three years of honorable service, he then sought an education at California Polytechnic State University in San Luis Obispo, where he earned degrees in chemistry and physics.

His subsequent 20-year career was as a physicist for the United States Navy, where he specialized in submarine warfare.

At the end of the cold war, he turned his attention to marine research and exploration, where he has focused on the search for and recovery of historical shipwrecks. His experience and submarine warfare background influenced his books Guardian Force, Earth Guardian, Guardian Probe, Guardian Strike, and Guardian Thunder.

D. Arthur Gusner and his yellow Labrador guide dog, Limo, currently live in Cambria on the Central Coast of California.