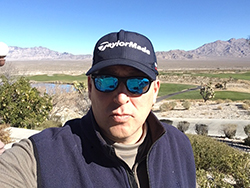 Currently, Chuck Apps is a Citizen Researcher focused on Ancient Earth Anomalies. He is the Creator of a successful YouTube channel “cfapps7865,” with over a thousand videos on ancient history. In addition Chuck is working with several Internet businesses.

As a child, Chuck was drawn to antiquities by Leonard Nimoy’s series, “In Search of….” His other great childhood passion was hockey and baseball…which later led him to coach his son’s hockey team.
His first year of college, young and immature, he fell in love and got married. He then had to leave his academic dreams to support a new family. Within a couple years, he had two kids and a house. The young couple tried to make it…but in the last few years, unsurmountable challenges led to his divorce at 33.  This brought on dark times in Las Vegas of angry and self destructive behavior.
Around 2009, Chuck came upon Graham Hancock’s “Fingerprints of the Gods,” which he credits with saving his life. It reawakened his childhood curiosity about history and inspired him towards positive action. He set out to educate himself, reading and watching anything he could pertaining to ancient history and anomalies. He was greatly influenced by John Anthony West’s “Serpent in the Sky” and West’s  talks about Egypt…where he proclaimed one cannot use modern thinking for how the Egyptians unveiled concepts and ideas. Chuck learned from West a fresh NEW WAY to look at things. So sincere was Chuck in his desire to understand more of how the ancients thought that he learned how to read hieroglyphs so he could directly understand the significance of their ancient messages rather than being fully reliant on another’s interpretations.  Robert Bauval was another important researcher that greatly influenced him.
Chuck considers himself an Internet Explorer…making extensive use of Google Earth.
Airing Live Saturday & Sunday
Midnight to 3 A.M. Eastern
9pm - Midnight Pacific