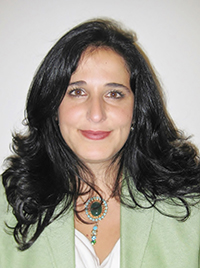 Dafna Tachover is the Director of 5G & Wireless Harms project of the Children’s Health Defense, a non-profit organization chaired by Robert F. Kennedy’s Jr, dedicated to eliminating the epidemic of chronic sickness in children.  Dafna is also the founder of “We Are The Evidence”, an advocacy organization for the protection of the rights of the many adults and children who have been injured by wireless technology radiation.

Dafna has a technology background, including wireless networks and infrastructures, from her service as a Telecommunication and Computers Officer in the Israeli Defense Forces (IDF), where she served as the commander of the computer center of the IDF’s Operations Center and its Headquarters. Prior to becoming an advocate on the wireless issue, Dafna worked for an international investment company and for a private equity fund in NYC in senior executive positions.

In 2012 Dafna initiated and led a Supreme Court case in Israel to replace the use of Wi-Fi in schools with wired networks, a case that led to the first limitations on Wi-Fi use in schools worldwide.

In the past three years she has been focusing her efforts in the United States. She founded “We Are The Evidence” and has been working on the wireless health effect issue and 5G at the Federal, State, and municipal levels. She has taken part in numerous public speaking engagements and has presented in front of state legislatures, was invited by mayors, municipalities, and other municipal bodies to give presentations and has been working with communities around the country to strengthen ‘small cells” ordinances. She has supported parents’ actions to remove cell towers from the vicinity of schools and to obtain accommodations for children who are sick from wireless radiation. She has been involved in legal actions, has been consulting in related lawsuits, and submitted an amicus brief in a case in New Mexico on behalf of 94 international organizations. On February 2nd, 2020 under Dafna’s leadership, CHD filed a historic case against the FCC for its failure to adopt health guidelines which are protective of health and the environment.

Dafna has been one of the leading experts and advocates on this topic globally, featured and interviewed by TIME, CNN, New York Magazine, The Epoch Times, and other media. She has appeared in documentaries about wireless health effects, including in the award-winning documentary “Generation Zapped.”