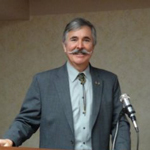 George J. Haas is the founder and premier investigator of the Mars research group known as The Cydonia Institute and is a member of the Society for Planetary SETI Research (SPSR). His research encompasses over 30 years of study and analysis of NASA and ESA photographs of Mars.

His early schooling was in the visual arts. He was an art instructor, writer, curator, and the former director of the Sculptors’ Association of New Jersey (1999 – 2001). During the 1980s he exhibited extensively throughout the New Jersey and New York area and was represented by the Grace Harkin Gallery in New York’s East Village and had a one man show at the OK Harris Gallery of Art in Soho in 1989.

Over the last two decades Haas has studied the art and iconography of North and South American cultures such as the Olmec, Maya, and Aztec. He has been a member of both the Pre-Columbian Societies at the University of Pennsylvania and in Washington DC.