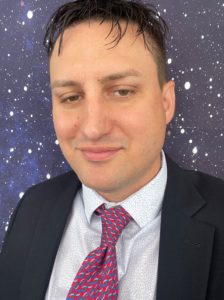 Joe Cerletti has been researching UFOs for over 20 years. He was raised in the east San Francisco Bay Area, in the foothills of Mount Diablo, in a beautiful small town called Alamo. In 2008 Joe had a UFO experience in Oakland, California with two other friends which changed the way he views the world. In 2014 he became good friends with John Lear which really sparked his curiosity on the phenomenon.

Eventually, Joe linked up with Harvard University Astrophysicist Dr. Rudy
Schild, and they have combined their collaborative efforts to researching the phenomenon of UFOs, and human consciousness. Their show is called The Consciousness Enigma, which can be found on YouTube, or on Instagram @ConsciousnessEnigma.

Joe dreams of becoming a broadcaster one day, and with the collaborative help and team effort of other great minds in the field, eventually breaking through the wall of misinformation that has been put in place by various US intelligence agencies, the monopoly on American mainstream media, and NASA.