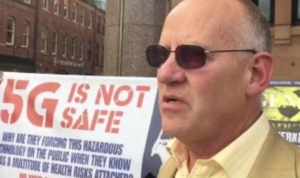 Mark Steele is an Inventor, Patent writer, Product Development Engineer and Head-up Display Weapons Systems Developer, specializing in Nuclear technology: Defence & Energy Sectors. He grew up in Gateshead, UK and currently resides in Newcastle where he is the Chief Technology Officer (CTO) at REEVU.

At an early age, he had an interest in weapons and weapon systems. He later invented and designed a variety of weapon systems that were marketed.  This experience allows him to understand and know what 5G is capable of. He points out that 5G has been used on the battlefield since the 1940’s.

Mark has been a technical advisor to SaveUsNow since 2017.
SaveUsNow, a registered political Party and movement fighting untested dangerous technology deployments on the World’s population.