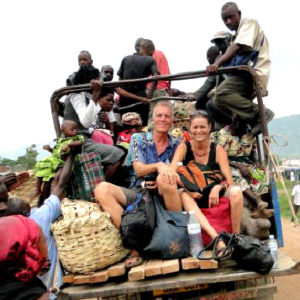 For the past 20 years, Nancy and Joseph Gill have enjoyed traveling around the world to over 150 countries, delving into little-known cultures in remote locations, mixing with the locals, savoring their distinctive cuisine and photo-documenting their customs. It’s as if they have literally lived and traveled through the pages of “National Geographic.” Their passion is to gift Universities far and wide with the largest digital library in the world, worth 35 million dollars, making it available to students whose resources are limited.

Joseph Gill grew up in Vancouver, Washington. His mother was an avid traveler and in the summers they traveled extensively together. In those early days, travel was very different…he noticed jewelry stores, and occurred to him that the jewelry business would allow him to continue traveling as an adult.

His father was an Orthopedic Surgeon and senior professor at the University of Oregon Medical School. He always encouraged Joseph to learn new things and arranged for Joseph to study geology which became Joseph’s, first love. He graduated with a B.Sc. from Portland State University in both Geology and Physical Geography. This became the foundation for a very successful gem business that supported his love of travel and adventure. His love of Gems started him on building the most extensive Gem library in the world and led the way to expand his library to over 700,000 books all completely organized on every topic imaginable, including original Isaac Newton books.

Joseph went on to make a large portion of his library available to the world at large on Archive.org which includes the widely used WayBackMachine to access pages no longer on the web. Archive.org is the most important site on the web containing a massive collection of books on every topic. Over 10 million books including the rarest books and manuscripts from the 1400s, thousands of scanned books from the British Museum, a Guttenburg Bible, and an original copy of the United States Constitution.

Nancy was raised in Nature in isolated N. Wisconsin, surrounded by a small loving family where she developed a sturdy sense of survival. She went to University, later married and then went on to become proud, single Mom of 2 amazing kids. Her sense of adventure took her to Hawaii where she and her children explored the length and breadth of the islands camping, hiking, back packing, snorkeling, paddling outrigger canoes, etc. They even traveled around the world for a year.

She met Joseph, an intriguing, unique man, at a funeral. They fell in love… Both of them world travelers, they reduced their belongings to 5 boxes each and set off for the great adventure. They have been exploring this fascinating planet non-stop together for close to 20 years.

After 2 months of marriage, Nancy was diagnosed with cancer. Firing the doctors eager for surgery and chemo, she healed herself naturally. This launched her on 20 years of exploring the human body and what keeps us healthy; body, mind, and spirit.

Nancy has worked as an Outdoor Education Director, Producer with Children’s Television, Professional model, Family and Children’s Counseling, Teacher of ESL, and Activist.