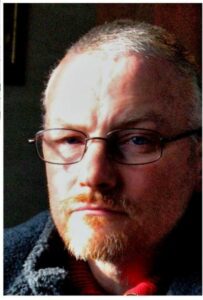 I became interested in the subject of “space” after reading Eric von Daniken – “Chariots of the Gods” — at the age of 17.  From that day I was hooked!!!

County Durham, United Kingdom.
I began reading everything I could of ancient history — Egyptian, Roman, Greek, Indian, Sumerian; learning about the these histories, and trying to understand what had actually taken place in the ancient past.  So much has been lost (or hidden from us) —  either intentionally … or unintentionally.
In 2011 I created the group “Alien Life” —  focusing on images from the Apollo missions, and the [unmanned] Mars rovers and landers, uncovering artefacts and structures that couldn’t possibly be of natural origin.

In 2012, I was contacted by Jose Escamilla to enhance images from the Clementine [unmanned lunar] mission, for the film “Celestial.”

I currently admin other “space and Mars anomaly groups” on Facebook.  In these groups alone, the membership is over one hundred and thirteen thousand people  — and the number is growing … fast.  I also supply these groups with gigapans from the Mars Curiosity and Perseverance rovers.

In total, over the years, I have created over 6000 gigapans — which aids our collective research tremendously.

Ok, that’s me … I’ll leave you with this:
“Throughout earth’s history there have been stories of great civilizations, gods descending from space in fiery chariots – buildings that could have never been built by human hands alone – astrological knowledge that we have only found out about in the last hundred years – paintings, carvings and writings that depict and tell of visitors from other planets.  We have sent satellites, rovers and men out into space — all bringing [back] and sending back information.
“Records and artefacts have been destroyed, hidden or locked away – images from satellites and rovers have been changed, blurred or blacked out – hidden texts in Vatican vaults that would crush religious beliefs to their foundations ….  “What are they trying to hide?!

“They are hiding the TRUTH – [that] we are not the only species in this Universe … this Truth is hidden by military and governments for far too long … for only “the chosen few” to see.
“Our [‘citizen-scientist’] research group is about finding out this Truth – finding the pieces that either have been lost … or deliberately withheld from us.  They [these pieces] could be anywhere — Earth, Moon, Mars … or somewhere else.

“Our task is to find them and fit them all together … so they finally show us the Real Truth ….”