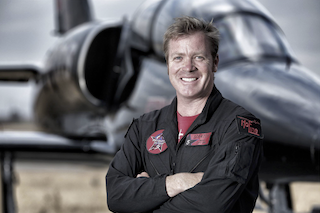 It was with the Snowbirds that Scratch was able to blend his passion for aviation and the artist in himself. In 2006 Scratch returned to the Snowbirds as the Team Lead for two years. Following this, Scratch was promoted to Lieutenant Colonel and had the honor of being selected as an exchange officer for post-grad training in Australia. He also received a Masters’s degree in Strategy and Management and became a fanatical surfer.