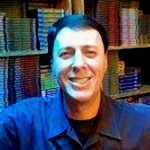 Tim Crawford is a Musician, Writer, Filmmaker, Artist, Producer, and the Creator of UFOTV®, UFOTV® Studios, and UFOTV® ALL ACCESS. Tim comes from a family of Artists and for 12 years, beginning at the early age of 6, Tim was privately homeschooled at UCLA by some of the best Artists in the World, in the fields of Theater Arts, Modern Dance, Music, Puppetry, Illustration and Film. Tim’s father John Crawford, is a Puppeteer who worked with Jim Henson and The Muppets as well as Filmmakers such as Steven Spielberg, George Lucas, James Cameron, and Roger Corman, inspiring Tim to become a filmmaker.

A-Pro Skater in the 70s, Tim was ranked 3rd Worldwide in Bank Slalom and a well established Venice Beach, CA. Outdoor FreeStyle Roller Skater during the Outdoor Roller Skating Craze of the mid to late 70s.

At the age of 20 Tim went to work for The Video Station creator George Atkinson, the Father of the Home Video Rental Store, and the Home Video Industry as we came to know it from the 80s through the late 2000s.

For 10 years Tim distributed movies for the top 15 Movie Studios to the new Home Video Marketplace. At the age of 24, Tim also Co-Found a Children’s start-up Home Video Label called Kid Time Home Video with a focus on Educational Entertainment for Kids, a novel approach in the home video market at the time.

In 1990, Tim founded Indy Video, a Marketing and Sales Company for the Major Movie Studios to Outsource Marketing and Sales of “A” quality lessor know movies. This became the launching pad for UFO Central Home Video, the Worlds only one-stop source for films on UFOs, Exotic Science, Conspiracies, Suppressed History and Mind and Spirit, at a time when no-one in the entertainment industry and the home video market even knew these films were in demand.

During that time Tim became the Creator and Executive Producer of the TV Series – Phenomena The Lost Archives – Hosted by Dean Stockwell, Star of the Hit TV Series Quantum Leap. The Series featured a cross-section of films and subjects that Tim curated while creating UFO Central Home Video.

In 2000, at the dawn of the New Millennia, UFO Central Home Video became UFOTV®, and expanded into a World Wide, Multi-Platform, Media Network. Today Tim spends most of his time as Filmmaker, producing and directing a steady stream of original movies while acting as Creator and CEO of UFOTV®, UFOTV® Studios and UFOTV® ALL ACCESS – a Subscriber Supported Video-On-Demand Streaming Service for movies focused on UFOs and all things Unidentified and Unexplained, in Exotic Science and Suppressed history. Tim Crawford lives in California with his wife, son, and daughter.