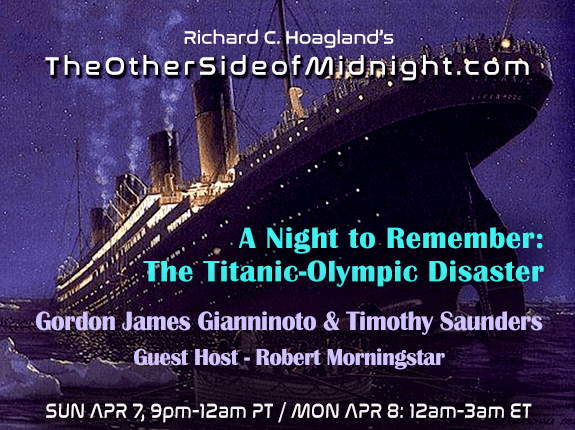 Trump Administration Suddenly Announces Return of American Astronauts to the Moon … Before End of President Trump’s Second Term! Find Out “Why” Here:   Click on Image for The Presidential Briefing Trailer: https://youtu.be/G7rLvWy8Ih0   Join guest hosts Robert Morningstar & Timothy Saunders as they interview guest Gordon James Gianninoto in regard to one of the greatest mysteries of the high seas, which still remains the Legendary sinking of The Titanic. Did the Titanic really sink that dreadful night, April 15th, 1912, as most people believe? Or was the lost ship really Titanic’s sister ship, RMS Olympic, that was intentionally scuttled in an elaborate insurance scheme through the skullduggery of a New York-London banking cabal? Tune in tonight to find out on this Titanic-Olympic Memorial show … A Night to Remember   Show Items Timothy’s Items: Click on Images to Enlarge 1- RMS TITANIC INQUIRY SCUPPERED BY FREEMASONS ? / The […]