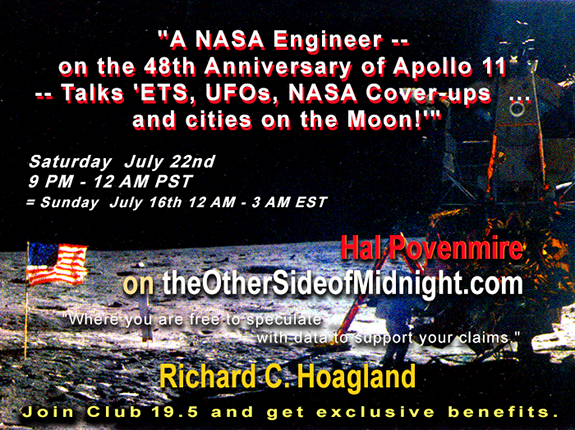 enterprisemission2001yahoo-com
Comments Off on 2017/07/22 – Hal Povenmire – A NASA Engineer — on the 48th Anniversary of Apollo 11 — Talks ‘ETS, UFOs, NASA Cover-ups … and cities on the Moon!
Dr. Joseph Buchman, Hal Povenmire

Richard’s Items: 1- 2- 3- 4- 5- 6- 7- 8- 9- 10- 11- Transcript of Trump Signing an Executive Order on the National Space Council https://www.whitehouse.gov/the-press-office/2017/06/30/remarks-president-signing-executive-order-national-space-council 12- President Trump Signs the Space Council Executive Order https://www.youtube.com/watch?v=TAUqcBc0hYI 13- READ: What Mike Pence said at NASA’s Kennedy Space Center http://www.palmbeachpost.com/news/national/read-what-mike-pence-said-nasa-kennedy-space-center/H27RY5IVOVE1GKVi8up3DJ/ 14– See on YouTube: Mike Pence Speaks at Kennedy Space Center in Cape Canaveral, Florida at 5:20 “And here from the Bridge to Space our nation will return to the moon and we will put American boots on the Face of Mars….” https://youtu.be/0ILYcxIupjU 15- Civilizations on Ancient Mars? US Congressman Dana Rohrabacher Asks NASA Panel Hal Povenmire’s Items:   Harold Povenmire was Born in Columbus, Ohio in 1939, and spent many of his early years as an amateur astronomer. In 1948, he began serious meteor observation and has observed the Perseids for 66 consecutive years. During this time he has photographed over 2000 meteors and […]