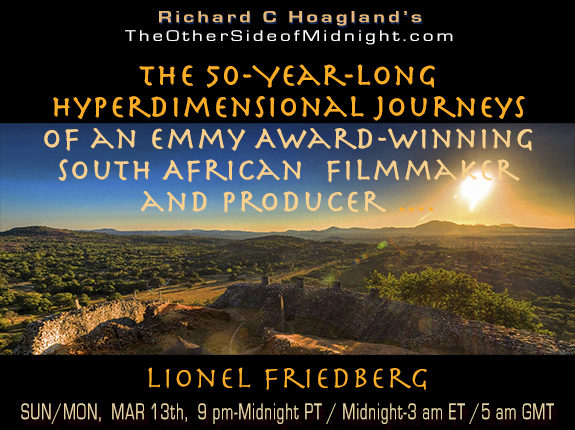 Guest Page Fast links to Items: Richard Fast links to Bios:    Lionel   Support The Other Side of Midnight! The 50-Year-Long Hyperdimensional Journeys of an Emmy Award-Winning South African Filmmaker and Producer …. My guest tonight is Emmy Award-winning producer and New York Times bestselling author, Lionel Friedberg. Lionel has spent over 50 years making films — from full-length theatrical features, to television series and classic documentaries. Friedberg grew up in South Africa during the “troubled era” of apartheid and bitter interracial strife, ultimately beginning his filmmaking career during the dying days of 19th Century colonialism in Central Africa. He eventually moved to Los Angeles — where his work ranged from the sound stages of “classic” Hollywood, to the remotest regions of the Earth. In the process, Friedberg’s film documentation of his surroundings exposed him to the extraordinary wonders of our planet, and brought him into close contact with many […]