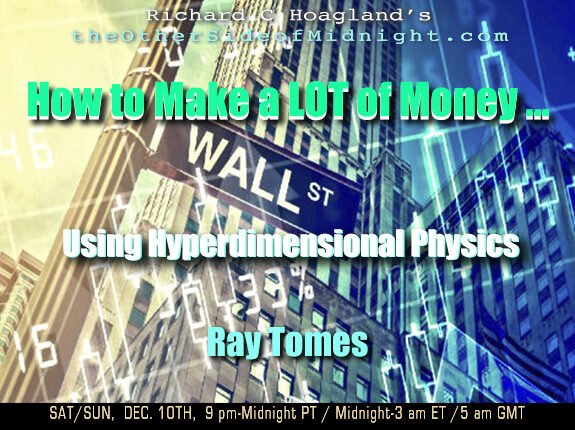 Guest Page Fast links to Items: Richard  –  Ray Fast links to Bios:   Ray  –     Support The Other Side of Midnight! How to Make a LOT of Money … Using Hyperdimensional Physics In the early 1930’s, at the height of the world-wide Great Economic Depression, American President Herbert Hoover turned to his Chief Economic Analyst at the Department of Commerce, Edward Dewey, and asked him (what turned to be) The Most Important Question: “What the Hell’s gone wrong with the World Economy … and how can we FIX it?!” Dewy’s ensuing decades of unique and world-changing inquiry, trying to answer THAT elemental question — into diverse fields as far away from “economics” as “oceanography” is from the Moon; his subsequent creation of the wide-ranging Foundation for the Study of Cycles; and his hard-won scientific results … after decades of seminal inquiry — led to Dewey’s over-arching conclusion: “There is considerable […]