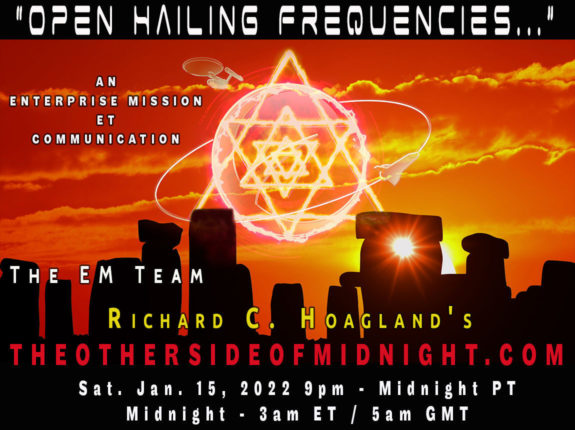 TO LISTEN TO THE SHOW Guest Page Fast links to Items: Richard – Jon – Maria – David – Thomas Fast links to Bios: Maria – Thomas – Jonathan – David – Ron   Support The Other Side of Midnight! We’ve been talking to extraterrestrials … and getting some extraordinary answers! A little over a month ago, the Enterprise Mission’s flagship radio broadcast — “The Other Side of Midnight” — launched a month-long series of high powered amateur radio transmissions into outer space, with two specific targets the intended receipients: The near-by Moon …. And the first acknowleged “Interstellar Visitor” to aweep through the inner solar system in late 2017, dubbed by its NASA Hawaiian discoverers, ‘Oumuamua — “a messenger from afar, arriving first ….” Tonight, we officially launch Phase II: A planned radio transmission and reception, conducted from the ceremonial center of the oldest known “ancient astronomical observatory” on Earth– […] 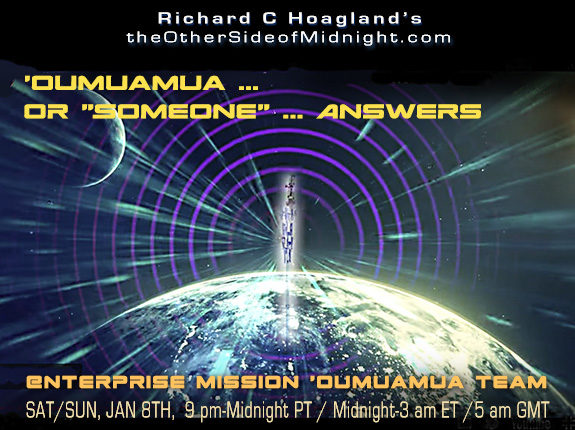 Guest Page Fast links to Items: Richard – Dave – Jon – Thomas Fast links to Bios: Dave – Jon – Thomas – Ron     Support The Other Side of Midnight! As our regular listeners well know, for more than a month we have been conducting a unique Enterprise Mission scientific experiment in “Extraterrestrial Communications.” >Specifically, an effort to send a radio transmission sequence (based on Hyperdimensional Physics) to the first known Interstellar Visitor to sweep through the solar system, back in 2017 — an object named by NASA ‘Oumuamua (“messenger from afar, arriving first” …). What we received in answer to these pioneering transmissions, the night of December 4, 2021, was anything but “a model radio response, out of the standard SETI Handbook.” First: the return radio signals to our Call arrived FAR faster than expected “speed-of-light limitations” — indicating a highly advanced extraterrestrial technology, far exceeding “limitations” imposed by […]