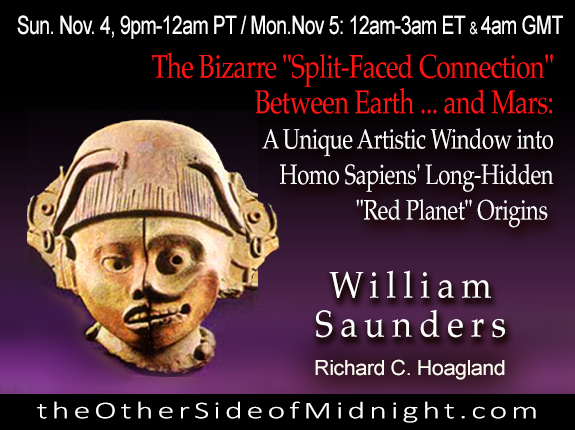 In 1992, I was invited to present — at the United Nations — a remarkable artistic space discovery … as part of our on-going “Independent Mars Investigation”: That, the massive mile-long “Face on Mars” — first imaged by NASA’s unmanned Viking spacecraft in 1976 — was actually– TWO “faces” …. A terrestrial “hominid” half … elegantly blended with a completely unexpected “feline” half … a lion. My guest tonight, William Saunders (along with co-researcher, George Haas) ultimately located myriad, multi-cultural examples of sculptures and paintings on this planet, that deliberately fused “two independent symbolic concepts into a single ‘master work’.” Hass and Saunders have now also found, in addition to the Face, dozens of additional examples of such “deliberately bifurcated geoglyphs” on Mars; published two major works on this provocative “two-planets’ artistic phenomenon”; and have concluded, as a result — independent of our own revolutionary Mars’ conclusions — that somehow, […]