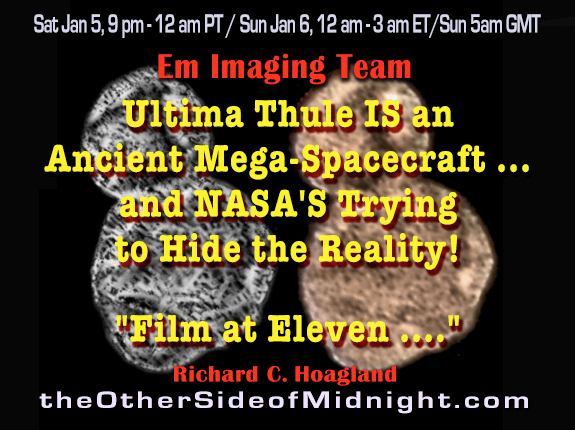 Click on Image for The Presidential Briefing Trailer: https://youtu.be/G7rLvWy8Ih0   Ultima Thule — the 4-billion-mile-distant-fly-by objective, in the predawn darkness of January 1, 2019, of NASA’s already historic “New Horizons” mission — turns out to be nothing less than–   A ~21-mile-long, incredibly ancient, incredibly-eroded, dumbbell-shaped spaceship!   The Enterprise Imaging Team made that bold prediction, before the fly-by, just last weekend … and it has now come true.   Tonight, we’re gonna prove to you just “how” … and how NASA seems to be trying to “stall” ALL further close-up New Horizons’ imaging releases of this extraordinary artifact … while they “think of something to explain it all away” ….   Or–   While they’re preparing for “the most mind-boggling press conference in the history of NASA”–   When (finally) they are forced by the scientific evidence to admit The Extraordinary Truth.   Join us … as we sort […]

The Presidential Briefing Enterprise Mission video briefing for the President of the United States on “extraterrestrial ruins in the solar system” —  Delivered through back channels to the White House on request, November 14, 2018. Trailer: https://youtu.be/G7rLvWy8Ih0 Imagine, if … single-handily … you could change History. It works like this: On this page, is located a link for ordering “The Presidential Briefing.” Order it … watch it …. Watch it again. Then … begin Tweeting — to your family … to your friends … to your “friends of friends” … to– The President of the United States. Why? Because, what you just ordered — and watched … and watched again — is nothing less than the SAME Briefing that was sent to the President from The Enterprise Mission just a couple weeks ago (per White House request, through a “back channel source”)– November 14, 2018. Now it’s your turn …. For […]

Is a “long-extinct” volcano on the planet Mars, named “Arsia Mons” — against everything that NASA has been telling us for over fifty years about “a long-dead planet” — suddenly, right now– Massively erupting?! And, if it is… how will such a world-changing planetary event affect all future missions — including … ambitious plans for “colonizing Mars,” being aggressively pursued by, among others, rocket pioneer Elon Musk? NASA is totally dismissing this phenomenon, claiming it is merely “ice-crystals, lofted higher in the Martian atmosphere because of seasonal winds, streaming over the massive, miles-high volcano from the east.” NASA spacecraft orbiting the planet show everything as “normal, while, inexplicably, European spacecraft have been repeatedly taking images — for over an entire month! — that show a stunning “plume of bright, white material …” stretching out behind Arsia Mons, extending literally thousands of miles across the pinkish Martian deserts … and growing larger! Just what the hell is really going […]