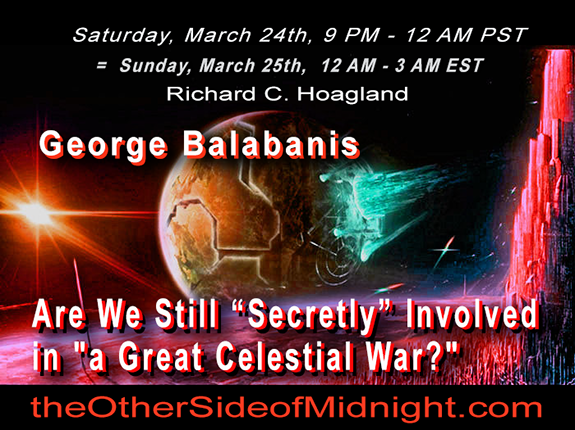 enterprisemission2001yahoo-com
Comments Off on 2018/03/24 – George Balabanis – Are We Still “Secretly” Involved in “a Great Celestial War?”
George Balabanis

Was this solar system — including Earth and (of course) Mars — once involved in an ancient, cataclysmic conflagration … which some have termed “the Great War?” Is this possible “incredibly ancient, catastrophic conflict” — which, apparently, destroyed entire planets and their moons — still on-going?– Unbeknownst to 99.99999% of current humans? My guest tonight, George Balabanis, explores the potential “hidden meaning” behind so many ancient myths, from all around the world — that all seem to be conveying the same theme … an ancient “War in Heaven” …. I wonder …. Could President Trump’s sudden call for a “space force of ultra-sophisticated technology and Marines,” and President Putin’s “answer” — his equally suddenly-announced “new mission to the Planet Mars” — have anything to do with the off-the-wall idea that this “Great War” … could still be going on!? Join us. Richard C. Hoagland   Help Support Our Mission to Keep the Show on […]