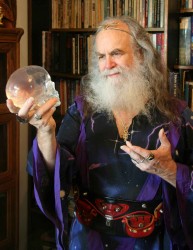 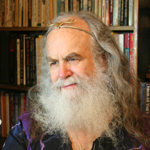 Oberon Zell is a renowned Wizard and elder in the worldwide magickal community, and Founder and Headmaster of the only online secular school of magick: the Grey School of Wizardry. In 1962, Oberon co-founded the Church of All Worlds, the first legally-recognized Pagan church with a futuristic vision, and he has been involved in the founding of several other major groups and alliances. Oberon was the first to apply the terms “Pagan” and “Neo-Pagan” to the newly-emerging Nature Religions of the 1960s, and through his publication of Green Egg magazine (1968-), he was instrumental in the coalescence of the modern Pagan movement. In 1970, he had a profound Vision of the Living Earth which he published as an early version of “The Gaea Thesis.” In the 1980s, he raised living Unicorns which toured with the Ringling Bros./Barnum & Bailey Circus.

Oberon is the primary artist of The Mythic Images Collection, producing altar figurines and jewelry of Gods and Goddesses. He is the author of Grimoire for the Apprentice Wizard, Companion for the Apprentice Wizard; Creating Circles & Ceremonies; A Wizard’s Bestiary; Green Egg Omelette; and The Wizard & The Witch. Oberon’s newest project is the Academy of Arcana in Santa Cruz, California. Opening soon, the Academy will be a museum and library of myth, magick and mysterie, and the first physical campus for the Grey School of Wizardry, offering classes and workshops, with a gift store of Curiosities.