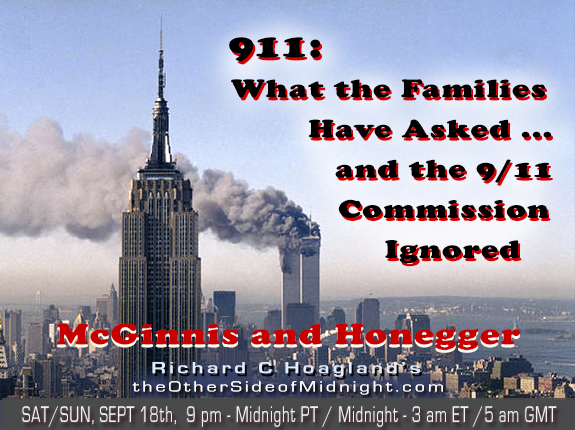 My primary guest tonight — investigative reporter and author, Ray McGinnis — has written an extraordinary history of “911” … and the literally “thousands of questions” posed by the surviving families of the almost 3000 victims, questions that have repeatedly, officially gone unanswered … if not simply ignored — for an entire generation.

“It is impossible to overemphasize the importance of this book. It is a tour de force that blows away twenty years of U.S. government lies and obfuscations about the mass murders of September 11, 2001, the foundational event of recent times that claimed thousands of victims whose relatives still cry out for truth and justice.

“Reading Unanswered Questions will roil you to the depths of your soul and illuminate your mind, as Ray McGinnis presents fact after fact, backed up by almost one thousand endnotes and twelve years of meticulous research. There is nothing speculative about this book.

“It is not a ‘conspiracy theory.’

“McGinnis ingeniously and brilliantly documents those murders through the eyes of victims’ relatives and their decades-long, agonizing efforts to seek honest answers from the U.S. government. To have their simple and obvious questions answered–

“To know the truth about why their loved ones died … and who killed them.”

Educated in political science, religious studies, and history, Ray McGinnis graduated with a B.A. at the University of Toronto. He also earned a Diploma in Christian Education from the Centre for Christian Studies. He was an educator with the United Church of Canada, working at their national office for 9 years. He subsequently worked at the Naramata Centre in rural British Columbia. From 1999 to 2020 he taught writing workshops. He is the author of Writing the Sacred: A Psalm-inspired Path to Appreciating and Writing Sacred Poetry. McGinnis is interested in the stories we tell, the ones we ignore, and how this shapes our worldview.
On September Eleventh, Ray McGinnis was at an adult retreat with 60 Americans in Joshua Tree, California. Seven years later, he discovered Kristen Breitweiser’s memoir, Wake-Up Call. A constant consumer of the news, he was surprised to learn that September Eleventh families had pressed for an investigation into the attacks. He was surprised mainstream news sources he relied on ignored this news story or kept it off the radar. This led McGinnis to delve further into the questions raised by the Family Steering Committee for the 9/11 Independent Commission. The search for information led him to uncover more open-source material and the range of views among September Eleventh family members. It has led him to reflect on what it means to live in a post-9/11 world, and the narratives we trust.

Co-Hosted by Barbara Honegger and Kynthea 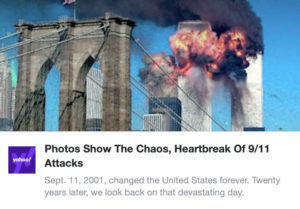 2. A little girl I knew was on the plane that hit the Pentagon on 9/11. Her death changed the course of my life as America changed forever.
https://www.businessinsider.com/little-girl-killed-911-her-death-day-changed-everything-2021-9 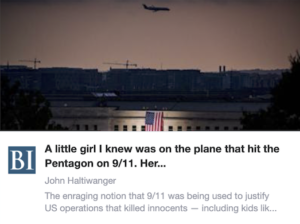 2. Family Steering Committee for the 9/11 Independent Commission’s
Website with the main page about their unanswered questions:

3. Family Steering Committee member, Kristen Breitweiser’s memoir,
Wake-Up Call: The Political Education of a 9/11 Widow, which was the catalyst for my going to their website and learning about all the questions the 9/11 Commission never addressed.

Plus their nearly 50 press releases to the media during the course of the inquiry:

which is the current iteration of his original website launched in the spring of 2002. Thompson’s website, which was later adapted for his book The Terror Timeline, was a key resource for numbers of members of the Family Steering Committee to help them form questions to give to the 9/11 Commission.


2. Behind The Smoke Curtain: What Happened at the Pentagon on 9/11, and What Didn’t, and Why It Matters
Video Documentary by Barbara Honegger, M.S.

4. From 9/11-Anthrax to The Pandemic: Life and Liberty In The Balance 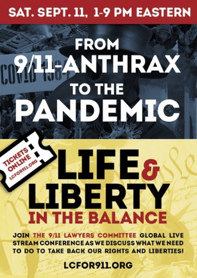 5. “Eyewitnesses for and Evidence of Explosives at The Pentagon”
By Barbara Honegger, M.S.
Chapter 13 in The Toronto [9/11] Hearings Report,
Proceedings of The International Hearings on The Events of September 11, 2001, held in Toronto, Canada on the Tenth Anniversary of the 9/11 Attacks


7. The Toronto Hearings Report, with Chapters by the Speakers at The Hearings
Available on Amazon.com at 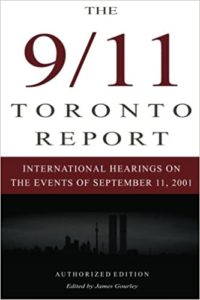 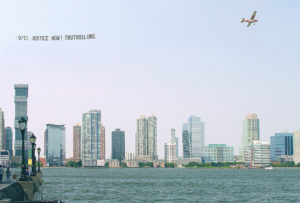 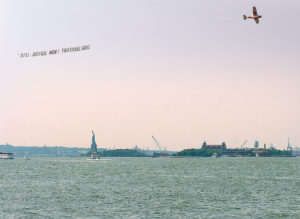