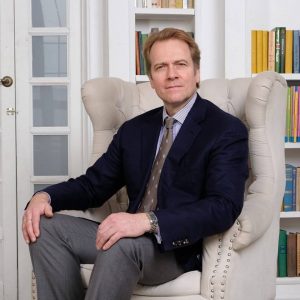 Mads Palsvig is the Chairman of the political party: JFK-Jorden Frihed Kundskab.

Mads grew up in the countryside in a traditional family of four, his father a psychologist and his mother a  Eutony therapist, a kind of body awareness and therapy and a smaller sister, who passed away at 18 years old from a heart attack. This was a big shock to Mads and his parents. He was 21 at the time.

Mads got into trading because he needed a job to fund his two degrees, a master’s in law and a bachelor in Finance. He started trading government and mortgage bonds on the floor on the Copenhagen Stock Exchange during the day and studied in the evening and on his holidays. Mads met his Russian wife on New Year’s Eve, 1989/90, in Copenhagen and they married two months later on March 9th, 1990. She was 18 years old visiting from Russia and he was 24. They have three grown-up children 26, 24, 22 and a grandson 3 years old.

In 1993, they moved to London and he worked for Credit Suisse First Boston and later Barclays and Morgan Stanley. Mads stumbled upon a couple of books by David Icke in Harrods in 2002 and since then he never looked back. It, however, became more and more difficult to work in banking, knowing how the system is working, rotten to the core and built to loot country after country. Not the kind of banking Mads was envisioning then and now.

Mads is a talented and dedicated fixed income, foreign exchange and derivatives trader offering over 28 years of experience coupled with a fluent understanding of corporate financial markets and demonstrated track record of handling risk managing complex portfolios of trades. Excellent business acumen focused on delivering high risk-adjusted returns. Best performance to date has been a 1-year return of $93M due to a combination of 3 trading strategies contributing with non-correlated trades; maximum drawdown that year from an intra-year profit and loss peak was only $7M. Adept at assessing organizational goals, developing trading style and implementing distinct strategies to ensure an optimal generation of revenue. Good decision-maker, skilled in inspiring co-workers and building strong working relationships with various colleagues in individual and team settings. Skilled communicator, fluent in English, Danish and Swedish with basic knowledge of German, French, and Russian. Proficient in deftly explaining complex technical terms to a wide range of clientele. Possessing a comprehensive understanding of industry norms and regulations.