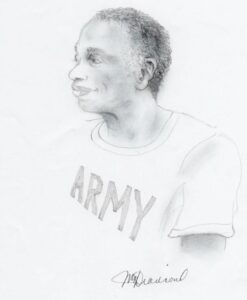 Two family members were a great influence in Marvin’s life. His great aunt, who was born in 1882, told him about King David and King Solomon. She also taught him about Presidents. His mother always offered encouragement regarding his studies, and she made it clear that leaders make a difference. Both taught him about the Holocaust while still in single digits.

President Kennedy offered a history lesson in real time. Marvin watched his press conferences, State of the Union Addresses, and other speeches. But JFK’s decision to go to the Moon–on the basis of fifteen minutes worth of spaceflight experience–captured his imagination. In fact, it still does.

Marvin comes from a family that has served in every branch of the Armed Forces, although they are predominantly Army, as was he. Because American involvement in Vietnam was winding down, he was sent to what was then West Germany . Upon return to the States, he finished what he began overseas at University of Maryland University College and received a bachelor’s in government.