Emeritus Director and  President of the Vatican Observatory Foundation 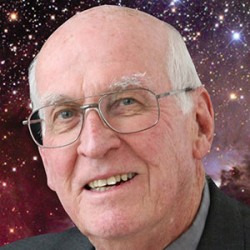 Fr. George Coyne SJ was born in 1933, in Baltimore, Maryland, and joined the Jesuits in 1951. He obtained his B.S. in mathematics and his licentiate in philosophy at Fordham University, New York City in 1958; he earned his PhD in astronomy in 1962 from Georgetown University and completed the licentiate in sacred theology at Woodstock College, Maryland in 1965 when he was ordained a Roman Catholic priest.

Following his doctoral work he continued his astronomical research at Harvard University and at the Lunar Planetary Laboratory (LPL) of the University of Arizona (UA). He taught at the University of Scranton and in the Department of Astronomy at the UA.

_Fr._George_V._Coyne_S.J.
Fr. Coyne’s research interests have been in polarimetric studies of various subjects including the interstellar medium, stars with extended atmospheres and Seyfert galaxies. Most recently he has been studying the polarization produced in cataclysmic variables, or interacting binary star systems that give off sudden bursts of intense energy.

In January 2012 Fr. Coyne left the Vatican Observatory to take up a chair at Le Moyne College, Syracuse, NY, where he is teaching astronomy and developing a lecture series regarding the science and religion dialogue.