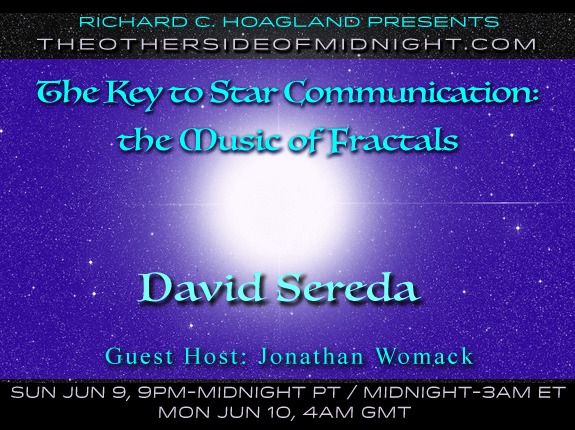 David Sereda, a prolific author and film producer brings his vast experience to inquire about Stellar communication. Having mapped the fractal patterns of over 50 Stars among the known constellations, David will share his profound insights on the nature of communication with consciousnesses off the earth. The Great Pyramid is a perfect fractal of a certain star…Guess Which One! 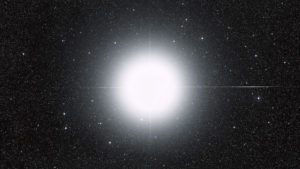 8-  Here is what Sirius A sounds like with 7 Octaves stepping up and overlapping using the Golden ratio Octave:

Click to Hear the 7 Octaves of Sirius A Star

A signal pattern which appears day and night at irregular time intervals. The signal contains many harmonics and lasts several minutes. The waveform and the frequency is changing during the presence of the signals. All received signals of this type are identical, no matter what time, day or year it is. There seem to be two independent sources, sometimes interfering with each other. One source is a little bit lower in its frequency than the other one. Played back at 160 times the original speed it sounds very strange like a human voice saying “Helloooo” very slowly.

David Sereda was born in Edmonton, Alberta, August 21, 1961. He was born into a family of 5 boys being the 2nd eldest. His father, Dr. Lynn Sereda, Ph.D. in educational psychology from UC Berkeley, CA, was dedicated to his children’s spiritual growth. His influence on David is one of the greatest driving forces behind what he does. His mother Linda Trafford, was a carpenter, artist and family lawyer in California.
Crystal Sereda first met David Sereda in Los Angeles at the House of Blues. Dan Aykroyd introduced us at a world meeting of sorts, wherein, my husband was introduced to me as a UFO researcher and historian. David, among other experts and friends were brought in to analyze some UFO footage in the screening room. At that time I especially enjoyed singing Jazz and blues in Los Angeles. I was professionally trained in opera technique, which I use with my husband’s music to create a new way of recording with the 5151, being the first to ever be recorded in modern history out of our “Scale of Life” new harmonic musical scale.
We have also enjoyed film making together which includes our narrating, acting, filming, and my singing vocals for our documentary films along side my husband’s love for music with scoring. We have produced such documentaries as Quantum Communication, The Voice, From Here to Andromeda, Hope For Humanity and Mona Lisa’s Little Secret.
David decided at a certain stage of his education to self design his learning and consequently has studied world religion, meditation, philosophy, science (Fringe science), physics, photography, screenwriting, art, film, music, consciousness, UFOs, Crop Circles, history, sacred sites, transpersonal psychology, yoga and more.
Since the year 1999, David has appeared on hundreds of radio shows such as Coast to Coast AM with Art Bell and George Noory, Jimmy Church, John B. Wells, Shirley MacLaine, Alan Handelman, Alan Eisenberg, and so many more. He has also appeared on nearly every news station on TV including CNN, Anderson Cooper, Fox News (various affiliates), History Channel "Ancient Aliens", Peter Jennings UFO special, "Seeing is Believing 2005" and more.
He has written self published books such as Evidence, the case for NASA UFOs, Singularity, Differentials, Face to Face with Jesus Christ, and jointly with his wife Mona Lisa’s Little Secret, and God’s Great Pyramid.
He has Co Produced, Directed, Edited and scored documentary films, "Evidence, the Case for NASA UFOs" (2001 on VHS 2003 on DVD), Dan Aykroyd, Unplugged on UFOs (2005), THE VOICE (2006), Quantum Communication (2007), Mona Lisa’s Little Secret (2008), Hope for Humanity (2009), etc. His films have had millions of views from DVDs, TV, and Youtube, etc.
He has produced and scored music for meditation, frequencies for tuning consciousness. He and his wife have a meditation practice and consciousness course series on audio and video called Quantum ReGenesis. David and Crystal Sereda have developed a company with natural technology developed both to imprint frequencies and vibrations into jewelry & crystals. He also designs and makes harmonic field transmitters and wands!
Return to Main Show Page
Fast links to Items : David
Fast links to Bios :  David  -  Jonathan