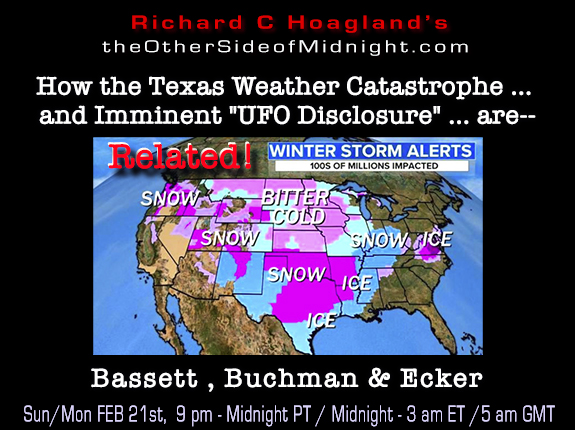 What do “UFOs” and an “extreme polar vortex” have in common (and, no, this is NOT a “trick question”)?

One (the “vortex”) is either a) the result of a sudden “torsion disequilbrium” in Earth’s normal planetary physics,  causing a mass of ultra-frigid polar air to suddenly flow southward across the continental United States, or b) the “planetry engineering” result of “someone” DELIBERATELY sending such a frigid mass to “attack” the United States from the north pole at our weakest point ….

With the official “declassification” of the existence of such GRAVITY-DEFYING craft — and the currently hidden “super civilization(s)” behind them — Earth’s political and technological systems will suddenly HAVE to expand … to encompass these previous “impossible” realities ….

That (and a LOT more …) is the focus of our “imminent UFO Disclosure” conversation tonight. 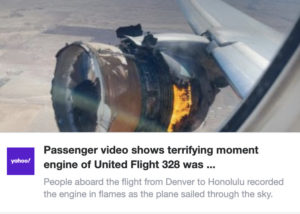 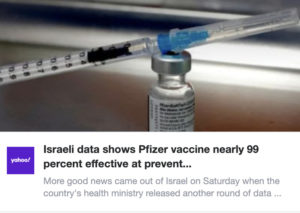 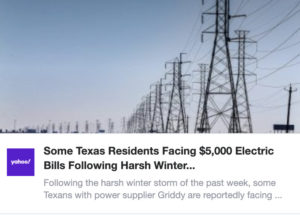 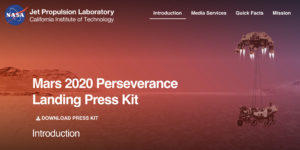 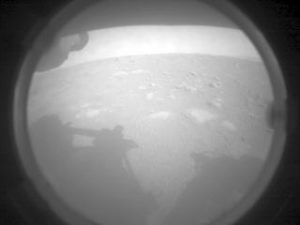 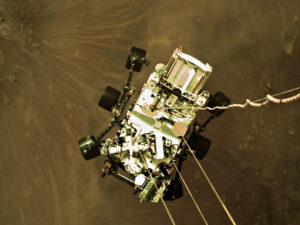 1- Roswell: The Ultimate Cold Case: Eyewitness Testimony and Evidence of Contact and the Cover-Up 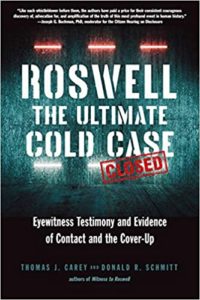 Don Ecker is a writer/researcher/commentator currently living in the Los Angeles area. Serving as the former Director of Research and Media Liaison for UFO Magazine for 20 years, Ecker is an internationally renowned investigator of the UFO phenomenon. A former law enforcement officer and criminal investigator with over 10 years experience, he brought legitimacy to a field that has for years suffered being painted with a fringe brush. He has written numerous articles for the definitive UFO publication, UFO Magazine, as well as articles for international publications, the United Kingdom’s Fortean Times, Omni, the Compuserve System, and the ParaNet Computer Data Base.

Ecker became interested in the UFO question in 1966, when along with several other people he was witness to a sighting of the enigma. “It was unlike anything I had ever seen before, and I realized then that there was much more to this than the authorities were letting on.”

After graduating from high school in 1968, Ecker attended college for one year and then enlisted in the United States Army. He was selected for the elite Army Security Agency, where he volunteered for Special Operations. He served in Southeast Asia for 26 months, was wounded twice, decorated and then returned to the U.S.

He returned to college for another year, then applied to his home town police department, where he became a officer.

In 1986, while a member of his department’s SWAT Team, Ecker was wounded, which led to his retirement. While recuperating, he started to research and write on the UFO mystery. As a criminal investigator in 1982, he had been leading an investigation of several cattle mutilations, which Ecker later discovered where somehow connected to the UFO mystery.

In 1989, during the International MUFON (Mutual UFO Network) Conference in Las Vegas, Ecker presented a paper on his research. He has appeared numerous times on the “Larry King Live” talk show on CNN and has been utilized repeatedly as an expert commentator and technical adviser by NBC’s “Hard Copy,” Fox’s “A Current Affair” and recently was the technical adviser and on-screen expert for the Fox Television “Sightings” program and ENCOUNTERS. He has also appeared on CNBC’s “TALK AMERICA”, and the SCI-FI Channel’s “ANTI-GRAVITY ROOM” and DISCOVERY CHANNEL’s “CYBERLIFE” and during the Roswell Anniversary, he was interviewed on “Entertainment Tonight” and “EXTRA.” Ecker was a featured speaker at Nevada’s dedication of the Extraterrestrial Highway during the premiere of “Independence Day”, the summer blockbuster of 1996.

Ecker hosted his own weekly national radio talk show, “UFOs Tonite!,” on Cable Radio Network for five years, and most recently “STRANGE DAZE” 5 nights a week on the Liberty Works Radio Network. Starting in January, 2004 Ecker and his good friend Dwight Schultz began a new national radio program called DARK MATTERS. Today Dark Matters Radio airs on the Cameo/CyberstationUSA Network. Ecker has been a guest on well over a thousand radio talk shows around the country.

Ecker brings important historical knowledge to the study of the phenomenon. As he has stated, “The case for a conspiracy of silence is there for all to see. All one has to do is to look to the history of the U.S. Government and UFOs. The government, and more specifically the U.S. Military, has always been aware of this mystery and the potential danger and promise it might represent. We as citizens have a right to know what is occurring, and what if anything our government is doing about this enigma.”

Ecker is true to his word and ideas. In 1991, he broke one of the biggest UFO stories of the year. Investigating the 1988 Soviet unmanned probes to Mars, Phobos I and II, Ecker uncovered an amazing story of the Phobos II’s apparent encounter with a huge unknown and the probe’s ultimate disappearance. He was able to secure a photograph of the unknown from the Soviet Glavkosmos Space Agency. He was asked to appear on NBC’s “Hard Copy” and Live CNN’s “Larry King” to talk about this incident where he revealed the photograph for the first time.

In 1992, Ecker once again broke one of the biggest UFO stories of the year. Breaking it once again on “Hard Copy” and then following it up on “Larry King Live,” Ecker brought to public attention the amazing story of STS-48, the Discovery shuttle mission photographing UFO enigmas in earth orbit, and the drastic maneuvers the unknowns took when “something” appeared to shoot at them.

Experience:
Ecker was a police officer and investigator with over 10 years experience, and former MUFON State Section Director and Investigator. He has written articles and been published in numerous national and international publications. He has also been a resident book reviewer for UFO Magazine where he has displayed a critical and insightful in-depth analysis of various new works in the UFO field.

Ecker conducted PR and personal appearances in behest of Paramount’s motion picture release “Fire in the Sky.” In January of 1995 the Disney Company in Orlando, Florida asked Ecker to set up an international two-week program with the top UFO researchers in the world to introduce their new alien attraction. It was a hit. 20th Century FOX’s summer blockbuster “INDEPENDENCE DAY” asked Ecker to sit on the panel being held in connection with the opening of the renamed Highway 375 to the “EXTRATERRESTRIAL Highway” that straddles Nevada’s legendary Area 51. Along with stars from the film and Nevada Governor Bob Miller, Ecker was asked to lend his expertise to the project.

Lectures:
Ecker has addressed the UFO mystery in domestic and international lectures. He has spoken in Vienna, Austria at the first international symposium of Vienna, in Sheffield, England at the BUFORA conference in 1997, the Mutual UFO Network in Las Vegas, the UFORUM society in Los Angeles and speaking engagements, radio and television, throughout the United States.

Ecker ‘s show“Dark Matters Radio” , is broadcast on KGRARadio.com Friday and Saturday evenings at 5:00 PM Pacific for two hours. The link to the archive page is http://kgraradioarchives.com/shows/dark-matters-radio/?loc=2018 .