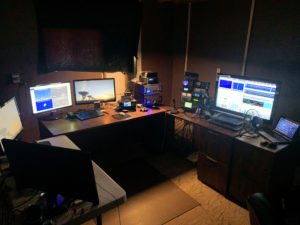 Diving toward the planets orbiting the sun at a steep (and mathematically-significant!) 33-degree angle, the mystery object — dubbed ‘Oumuamua by NASA (“a messenger from afar, arriving first …”) — made a breathtaking hyperbolic turn around the sun in late 2017 at 195,000 miles per hour (!), before racing back into the interstellar darkness in a little over four short months … never to return.

Our own thoughts (and calculations, based on its unique “Hyperdimensional” orbital elements) first raised the crucial cosmic question:

“Could this finally be a genuine Interstellar Probe — sent to ‘look us over’ … from some other Galactic technological civilization?!”

Since we published that extraordinary possibility in 2017, others have joined in … but (as far as we can tell) NO ONE in four long years ever tried to “send a message TO ‘Oumuamua,” to see if it would ANSWER … until now.

Tonight (and Sunday night) we shall report some of the Enterprise Mission’s first “translated” results — from our beamed radio transmissions to ‘Oumuamua since December 4th. Results not only containing the SAME “hyperdimensional codes” we have been sending … but answers that seem to directly connect to OUR OWN ancient history of “sacred geometric sites” here on planet Earth!

Join us this weekend, for a unique Christmas Gift … directly from the stars ….