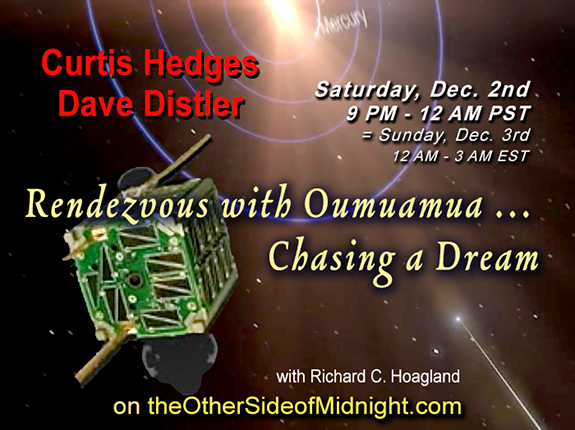 What if we could physically chase … and then catch (before it completely leaves the solar system … never to return) — history’s first acknowledged, increasingly tantalizing, recent “interstellar visitor?”  Mainstream astronomers for the first time are wondering “out loud” … about the REAL nature of our recent visitor– And, they’re seriously … scientifically … asking– “Could this anomalous object, in fact, have been Mankind’s first ‘intelligently directed’ interstellar probe of our potential presence in the solar system — ala Arthur C. Clarke’s classic story line in “Rendezvous with Rama!?” What if — not “the government” — but a collection of private “citizen scientists and engineers” mounted a privately-funded “robotic expedition” TO Oumuamua … to find out!? To literally chase … and, ultimately catch …  this first-time celestial enigma– To land on it, again robotically …. Go inside?! What might we find out … that … could literally save the world? Tune in this Saturday night (Dec. 2), Midnight, Eastern Time, to “The Other Side of Midnight” — as we […] 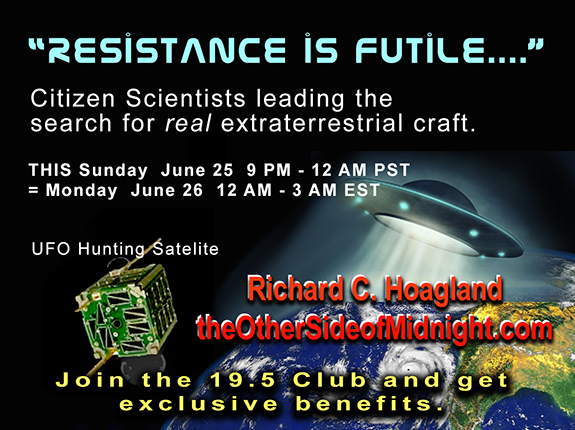 Curtis Hedges did an amazing job filling in for Citizen Scientist, Dave Shock of CubeSat 4, who landed up in the hospital with a concussion. Curtis shared some amazing inventions that operate contrary to Newtonian physics. Breakthroughs that will revolutionize science as we know it. Curtis Hedges Websites:  http://cubesat.tech   TBLNFilms.com Curtis Hedges is an eminent UFO researcher, a pioneer Bboy judge, a TV/film producer, a sales and marketing expert and a philanthropist at heart. Curtis is accredited with many “first accomplishments” from his respective fields of study. Executive Director for CubeSat 4 / Disclosure. CubeSat 4 is the first satellite project of its kind. The goal is to expose to the general public a live uncensored video feed from outer space accompanied with other data such as radiation and telemetry to name a few. Low earth orbit launch through interorbitalservices.com scheduled for the 1st quarter of 2018. Communications and line of […]