Nov
2018/11/17 – Dane Wigington – Is “Someone” Engineering a Slow-Motion Planetary Apocalypse? 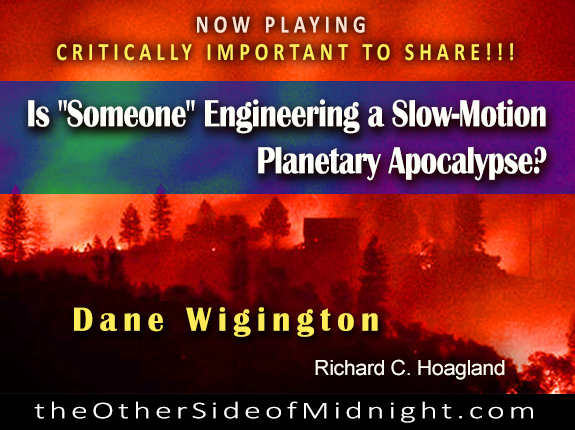 This Critically Important Show is Available for All. What is “geoengineering?” Simply put, it is “the deliberate alteration of the Earth’s environment, via technological means ….”  Does our 21st Century civilization truly possess this “god-like” geoengineering capability? Unfortunately, yes. According to my guest tonight, Dane Wigington, “current global climate engineering/geoengineering programs are radically disrupting weather patterns, disrupting the hydrological cycle (causing massive drought — and fire! — in some areas, massive flooding in others), destroying the ozone layer, and contaminating the entire planet with the toxic fallout from these atmospheric spraying operations … “We are ALL being subjected to ongoing, totally unacknowledged and illegal planetary tests …. “ Why?! Join us to find out … and, to find out what YOU can do to Stop the Madness.  Richard C. Hoagland     Show Items Dane Wigington’s Items:   Introducing Geoengineering / Climate Engineering to the Uninformed       DOWNLOAD Geoengineering – […]

Dr. Paul LaViolette has been president of the Starburst Foundation since 1984, where he has conducted interdisciplinary research in physics, astronomy, geology, climatology, prebiotic evolution, psychology, and anthropology.  He received his BA in physics from Johns Hopkins, his MBA from the University of Chicago, and his Ph.D. in systems science from Portland State University. After conducting occupational safety research at Harvard University, he invented and patented an improved rebreather apparatus. He has conducted solar desalination research for the state of California, done solar energy consulting for the Greek government, and had also consulted Hughes Aircraft on ways to improve company innovation.  In 1993 he reverse engineered the B-2 bomber’s classified propulsion technology and more recently has disclosed and explained the microwave beam technology used to propel vehicles developed in the super secret Skyvault Project. He is the originator of the subquantum kinetics physics paradigm and also discoverer of the galactic superwave phenomenon, the notion that cosmic ray outbursts from the galactic core periodically trigger major shifts in the Earth’s climate.  In testing […]