Comedian Garry Shandling dead at 66 [News] Moons of Saturn May Be Younger Than the Dinosaurs [News] Argentine President Mauricio Macri is seeing President Barack Obama off as he prepares to return to Washington Clinton trip to Bariloche 1997 Updates on Agentina trip from AP Argentine article about planning for the Presidential visit to Bariloche Presidential Toasts Buenos Aires 2016 Eisenhower in Bariloche 1960 9.  10.  11. 12.  13.  Jimmy Carter vacaciona en Bariloche Greg Ahrens Greg Ahrens is an Associate of ENTERPRISE MISSION, having collaborated with Richard C. Hoagland on several papers beginning with an investigation of the Norway Spiral in 2009. “I became interested in Space at an early age, and watched the early Project Mercury launches on TV in grade school. My youngest brother was born on the same day as John Glenn’s first American orbital flight. My father was a mathematician and systems analyst for a major aerospace […]

. Dr. Joseph P. Farrell Website: THE GIZA DEATH STAR Born and raised in Sioux Falls, South Dakota, Joseph P. Farrell has a doctorate in patristics from the University of Oxford, and pursues research in physics, alternative history and science, and “strange stuff”. His book The Giza DeathStar was published in the spring of 2002, and was his first venture into “alternative history and science”. Following a paradigm of researching the relationship between alternative history and science, Farrell has followed with a stunning series of books, each conceived to stand alone, but each also conceived in a pre-arranged sequence: The Giza Death Star The Giza Death Star Deployed Reich of the Black Sun The Giza Death Star Destroyed The SS Brotherhood of the Bell The Cosmic War Secrets of the Unified Field The Philosophers’ Stone The Nazi International Babylon’s Banksters Roswell and the Reich LBJ and the Conspiracy to Kill […]

Dr. Robin Falkov Passed You are Welcome to Share Below   Holding Prayers for Robin who “crossed over” on March 3rd, 2019 and Richard who mourns the loss of his life partner.   Click Here for TRIBUTES TO ROBIN DURING THE SHOW…THE DAY OF HER PASSING   Robin’s FaceBook Page In Loving Memory of Dr. Robin Falkov www.healthfreedomrights.com Robin was a real crusader for many causes with a deep passion for alternative health care.   Robert Morningstar:  Dr. Robin Falkov Passes Into Afterlife It is with deep sadness that I received the news yesterday (3/3/2019)  of the crossing over into afterlife of Dr. Robin Falkov. Robin was a dear and caring friend to all of us. Robin was always ready to help. I cherish the memory and the honor of having been able to exchange ideas with her on the air several times as a guest on her show. […] 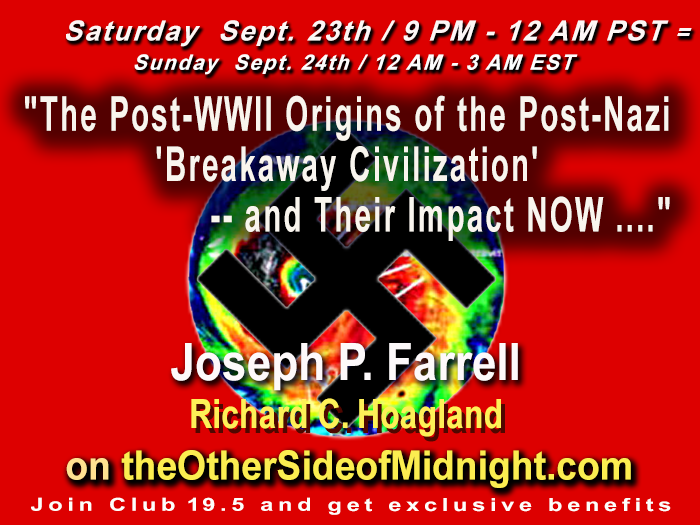 enterprisemission2001yahoo-com
Comments Off on 2017/09/23 – Joseph P. Farrell – “The Post-WWII Origins of the Post-Nazi ‘Breakaway Civilization’ — and Their Impact NOW ….”
Dr. Joseph P. Farrell

Richard’s Items: 1-  US flies mission north of DMZ, sends message to North Korea 2- END OF THE WORLD: Nibiru to spark ‘seven years of PAIN beginning on October 21’ 3 –  “Onlookers Mystified” – Ocean disappears once again from Brazil coast – *South America Roll* 4- Why There is Only One Option to Deal with North Korea: A Bloody War Joseph P. Farrell Items:   1- 2-   3- 4- 5- 6- 7- Dr. Joseph P. Farrell has a doctorate in patristics from the University of Oxford, and pursues research in physics, alternative history, science, and “strange stuff”. Raised in South Dakota, he has had a wide range of jobs and is currently a full-time author and researcher. His many books include: The Giza Death Star Trilogy; Reich of the Black Sun; The SS Brotherhood of the Bell; Nazi International; Secrets of the Unified Field; Roswell and Reich; The Cosmic War; Grid of the […]